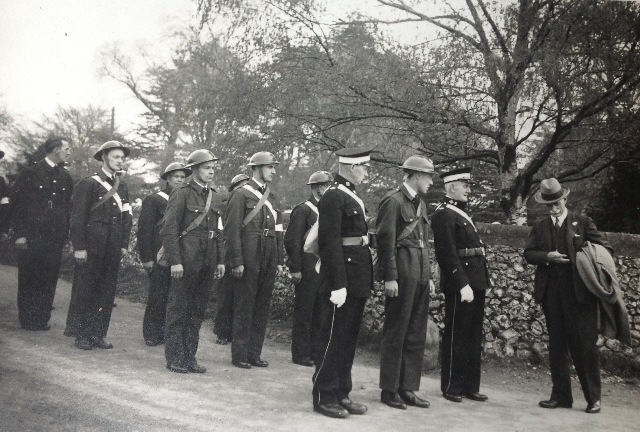 Dad’s Army writers Jimmy Perry OBE and David Croft both had links with local ARP units.  The character of Pike was closely styled on Jimmy, who had been 17 years old when he joined the 10th Hertfordshire Battalion and his co-writer, the late David Croft, worked as an ARP warden.  The 10th Herts Batallion HQ railway section was at Watford Junction station

The ever-increasing number of new battalions being formed resutled in a reshuffle in October 1942 and the western group under Colonel P de Soissons was made up of the 7th, 8th, 9th and 10th Battalions with their HQ at Cromwell House, Upper Highway, Hunton Bridge, Kings Langley. It is likely that Chorelywood came under this group.

Although we were not badly affected by bombing there were occasional hits in the area including one on the 26 October 1940 when during the day enemy aircraft again made continuous attacks on  London and South East England.

“Night activity commenced at about 1800 hours, the Capital again receiving most attention, and Birmingham suffered its third night in succession of heavy attack  Railway Communications were attacked, with one outstanding features being the line from Chorley Wood to Chalfont being blocked.” 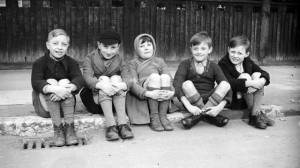 Evacuees were sent out to Chorleywood as part of national Operation Pied Piper congregated near the air raid siren opposite the Memorial Hall (now the car park) ready to be selected by families and gathered inside the Hall when weather was bad. But, according to author Martin Parsons in his book  I’ll take that one, the ‘Chorley Wood bridge-playing set avoided taking evacuees when they could’
The Hall was used for worship too. A lot of evacuees sent to Chorleywood were Jewish boys, who by early 1941, used the Memorial Hall for minyan – prayer sessions every Saturday and during periods of religious festivals

Other evacuees made their own way.

“I was one of the youngest evacuees of the 2nd world war who lived with 2 siblings with Mr & Mrs Colls at “Sunfold” Clements Road, Chorley Wood for the whole war, also 2 other of my sisters were evacuated with Mr & Mrs Birdwood at “Sherwood” Long Lane, Heronsgate, Chorley Wood.
It shows the generosity of the residents of Chorley Wood who could accommodate 5 evacuees from 1 family.
I have to say how lucky I was to spend my formative years in such a wonderful place full of generous & understanding people, a totally different environment from the Jewish East End of London which I returned to after the war.”

It was on a milk farm in Colchester, Essex with an Irish family, and it was great. It was like really for me coming from London, it was like going into a small hotel where the food was marvellous. There was a cook, a maid, a valet and someone who waited on the tables and it was marvellous. Everything that we ate was home grown by two gardeners in enormous grounds and grew all the treats you could mention and our children had plenty of milk. There was a lovely lake and my boys, John who was 5 and the other Peter who was 2, really enjoyed it.

Anyway, we were there for getting on for about 5 weeks and then there wasn’t any bombing for a year so we all decided to return to London as we thought maybe there wouldn’t be any bombing there. So we went back to London in Bow where we lived and everything was normal for about 9 months and then War did break out. We were there for a while and it got so bad that we couldn’t stay there. Part of our house was bombed and we lost part of our home and so we had to be evacuated again.

The bombing was very bad then and it was getting very serious so we decided, after somebody suggested, that we go to Chorley Wood in Buckinghamshire on our own back to try to be put up to stay there. We arrived in Chorley Wood station and while we were waiting outside wondering which way to go, a lady drove up to drop off her husband at the station to go to London and she said to us, ‘Do you want a lift?’ I said, not really, we had just come down on our own to see if we can be put up somewhere. She said that she might get something for us, so we all got in the car and drove us to a little village in Chorley Wood and we waited in this car for nearly an hour. We were given food and drink while we were waiting and she was talking on the phone to someone who had an empty cottage which was lovely. She got it for us in the end and it was really great and we all got settled in this empty cottage. Everything came in — furniture, you name it, chairs, tables. Boxes of food, bottled fruit, everything you could name was there for us and it was great. We were very lucky and very grateful and when the raids used to start, we would stand at the door and look over towards London which looked all alight and you could hear the guns going over us but they didn’t bomb Chorley Wood.

Leila Shephard went from Southend on Sea to Hanwell, West London which was  ” like going from the frying pan into the fire”  and then was sent to Rickmansworth.

” As it happened, my Aunt has seen in the local newspaper that evacuees were required in Rickmansworth. As the situation had obviously worsened, it was compulsory by then for every house to accommodate evacuees, if they had not already done so, after the main stream of children had arrived earlier. After a telephone call, my cousin and I were accepted by a young couple who lived in Meadow Way, Rickmansworth. When we arrived at the house with our bags hastily packed, we were greeted by Leonard and Audrey Smith and also his mother and father who were staying with them.

It was a pleasant house, newly built and designed by the owner himself. He also was designing and making the furniture. I don’t know if this was his job or his hobby! I do recall, though that he worked for the BBC.

The school, where we were to be located, was in Chorley Wood, which was situated about one and a half miles away. It was a terrible winter and the deep snow persisted. My poor cousin suffered badly from chilblains due to the trek we had to make each day I guess.I suffered from sheer fear of going to a school that I didn’t like. My teacher was a dragon who scared me so much I played truant within a week of going there! The school was very overcrowded with the influx of the evacuees and the normal intake of children who lived there anyway. A strict discipline had to be maintained. The headmaster, a tubby man with a clipped sergeant major moustache, used to come onto the classroom every day reminding us that he could administer punishment with this big thick stick for the boys and a wispy one for the girls. This stung you hands as I had the misfortune to be on the receiving end one morning for talking in assembly!

I did settle down in an uneasy fashion, until one day my new class teacher told us in an ominous voice “For homework you must learn the fourteen times table and each one of you must recite it tomorrow morning”. I hadn’t got that far with by tables and maths was not my strong point anyway. I was just terrified and refused to go to school the next day. This resulted in the Headmaster and the Headmistress calling at my house to sort the problem out and they did. I was moved to another class and got on very well after that.”