by Jill Visser
in Chorleywood History

When Friends of Chorleywood House Estate noticed that a commemorative plaque in the parkland had disappeared they decided to investigate and ended up unlocking some fascinating Chorleywood history.

“Volunteers from Friends of Chorleywood House Estate (FOCWHE) are constantly working on the Estate parkland” says Tim Venner, FOCWHE working party Organiser, “We had been cutting back the brambles and scrub for months last year and in the autumn we reached a magnificent copper beech tree which had been planted by the local WI. There used to be a commemorative plaque by the tree, but it had disappeared so we decided we should replace it – but we needed to find out more.”

“They had been members of the Chorleywood W.I. Afternoon group which disbanded 15 years ago. They didn’t remember why the tree had been planted but told me that all the Minute and Record books had been taken to Herts. W.I. HQ so I decided to try and track them down.”

Tim started his detective mission by talking to Anona Morgan, Adviser/Archivist at Hertfordshire Federation WI. Making contact with Women’s Institute WI HQ was of additional interest to FOCWHE, especially to Lynda Herity, Curator of the ongoing Lady Ela Russell exhibition, as Lady Ela of Chorleywood House was the first President of the Chorleywood (Afternoon) WI when it was founded in 1919.

Within a week of the initial conversation between Tim and Anona, the WI archivist found two Chorleywood linked boxes in the loft – one containing WI minutes, record books and certificates and another holding a scrapbook made in 1965. Tim arranged to travel to Wheathampsted to collect them a few days before Christmas.

”The archivist was happy to hand the books over as she believes local is best.” says Tim, “I couldn’t believe what I saw! We have unearthed a treasure trove. We found out what we set out to do – that the tree was planted as part of Plant a tree in 73 which was a Government sponsored scheme launched in the wake of the spread of Dutch Elm Disease, but there was an extra bonus – we came back with a big chunk of Chorleywood history revealed in the WI record books and a scrapbook. The book turned out to be a hefty album two inches thick which pieces together life in Chorleywood in 1965 and was compiled as an entry to a Golden Jubilee WI competition. It won a Gold Star!”

The scrapbook is divided into two main sections   – Part 1: The Place; Part 2: The People. The content covers all aspects of the village you could think of from local transport and industry to recreation and Chorleywood of the future. The 137 pages are packed with accounts and observations, photographs, letters, newspaper cuttings, tickets, timetables, programmes, stamps and even fabric and wallpaper samples representing fashion in clothing and interiors of the era. We especially love the watercolour illustrations of Chorleywood weather through the months and flora and fauna found on the Common.

“The whole process was like unravellling knitting” adds Tim. “ The minutes are fascinating, the WI meetings recorded are evocative of an era. One of the resolutions passed in 1922 was that they should petition Parliament to introduce “the compulsory teaching of plain needlework in the Schools. We get an insight into the speakers and topics discussed, even who makes the tea! We read about competitions they held – one was for the prettiest handkerchief and another for the best decorated potato. One asks entrants to ‘Guess the weight of the President – including cake!’

People were terribly nice and genteel and of a class – they wore hats to the meetings! So much is revealed in the record books but the real find is the scrapbook – it is truly wonderful!”

Chorleywood Magazine was privileged to be amongst the first to look at the scrapbook . 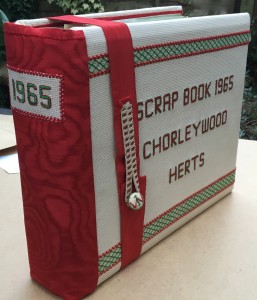