DIARY OF A MET HOUSE 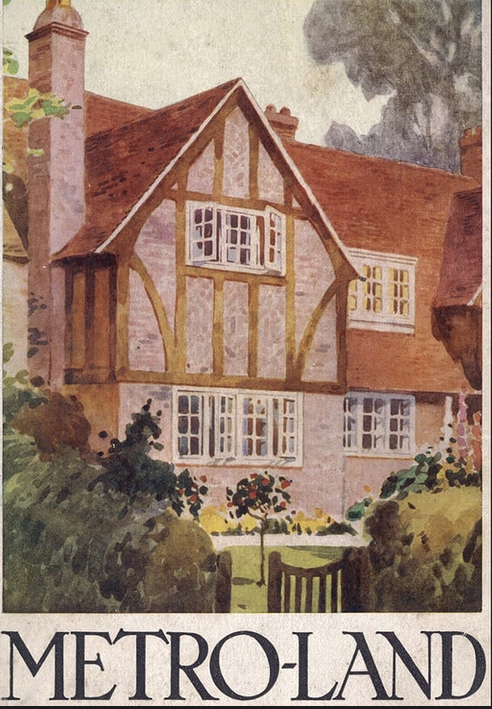 In June 1938 Stanley and wife ‘Tommy’ were starting their first summer in one of the newly built Met homes in Carpenters Wood Drive. Eighty plus  years on, daughter Ginnie and granddaughter Lisa are still Chorleywood residents.

We were privileged to look at a precious scrapbook, compiled by Stan in autumn/winter 1937 and spring 1938, during the construction and fitting of the house

“When my parents bought 22 Carpenters Wood Drive in 1938 they paid £825 for it! ” says Ginnie Jenkins who lived in the house for the first six years of her life, “including £25 for an extra five foot of garden! We still have the Met Railway Country Estate’s booklet they were given with details and floor plans of all the properties for sale on the estate – it’s a family heirloom!”

The house, a ‘Met’ home, was one of scores in Chorleywood (including Shire Lane, Main Way, Brushwood Drive, Beechwood Ave, Carpenters, St. Peters Way, Grovewood Close and Chalfont Lane), many built by by Gullett and Sons Ltd * and all prompted by housing demand around the Metropolitan Line as a result of the Live in Metro-land campaign (launched 1915) and private builders’ subsidies following the 1923 Housing Act.

The couple, as Stan put it, were ‘very happy with their prospective house’ and especially at the thought of moving from a flat in St John’s Wood, London to the country.

They both worked long hours in a dress business, Stan as Company Secretary and Tommy in the office and as a model for the garments, but they spent every spare minute at the Chorley Wood plot establishing the beginnings of a garden, setting up a shed and keeping an eye on the building work.

‘We are going down to Chorley Wood every Sunday now but these trips never degenerate from adventure into routine as there is always the curiosity occasioned by the progress of the house.’

One of their first jobs, sorting a shed, turned out to be a mission in its own right and Stan had to swap suppliers to save delivery time. But when all was finished, he was happy

‘Well, the shed is up and quite a good job too, though it looks a little lonely and not altogether straight from a distance.’

The scrapbook reveals Stan’s intense passion for plants and flowers, especially roses, and includes notes of varieties and a planting plan. He is sad at some ‘disconcerting pilfering’ when ‘four rose bushes mysteriously disappeared’

‘The salesman on the estate suggests rabbits as the cause of the mischief, but if it is rabbits that are responsible for entering the shed by force and stealing a foot rule and a screwdriver and drinking a bottle of lemonade then we are in for a pretty hectic time in the future.’

We read of Tommy’s ‘day to day lists of little details’ and Stan’s reaction to them!

‘I don’t know what effects it will have on the builders but it frightens me all right.’

Sunday Jan 16th is a milestone

‘The house is now boarded and tiled. On Saturday Tommy climbed, at the risk of her neck, to the first floor and waved perilously to me out of the window.’

By Tues February 8th, 1938, the house begins to take shape

“The house now has a personality, If it were a baby I should say it had begun to talk. Tiled, roughcast and windowed it looks very presentable and only needs doors to become cosy”

They soon reach ‘the time things are to be done and things are to be chosen’ which leads to a visit to Youngs** builders’ merchants in Chorleywood to choose fittings, including fireplaces and paint.

‘Paint we chose in slate blue for the outside. This was my choice. Tommy wanted emerald green but I condemned this on the ground that it was too generally used and wore badly.

“Fittings and furnishings are beginning to take up some of my time to the detriment of seed catalogues. Tommy and I are spending large portions of our lunch time at Tooth and Tooth auction sales just off Oxford Street. So far we have purchased a very nice mahogany table after the style we both admire and a refined cocktail cabinet of the same wood, There now remains a carpet, chairs and a sideboard to complete the dining room, We both prefer to buy second-hand like this than empty our pockets over ostentatious modern veneer furniture.’

* Gullett and Sons Ltd started in 1923 prompted by housing demand around the Met Line (The Metropolitan Railway Country Estates Company Ltd launched their “Live in Metro-land” campaign in 1915 to entice workers to move out of London to rural Hertfordshire) plus builders’ subsidies. In the 30s Gulletts became a registered company building houses in Herts, Bucks, Middx and further afield. Post-war they acquired an office/yard in Chorleywood and sold supplies. The shop remained Gulletts until 1987 when it became Poores, followed by Lords in 2016 and still sells hardware, paint and household necessities